How to cope with and celebrate, red Solo cups, in-laws and all!

You may have heard me tell this story before, since it’s one of my favorites in family-bashing lore.

A few years before my mom Maggie passed away, my brother-in-law, up from California, 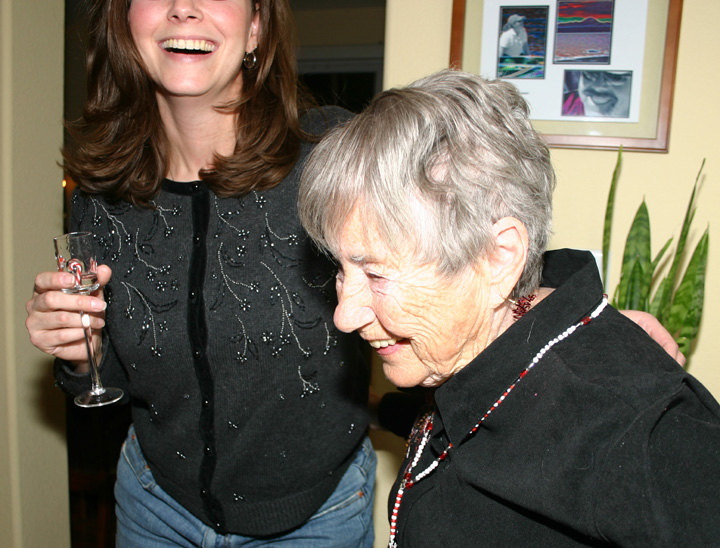 convinced her to try his medicinal marijuana. On the sly, Mom experienced her first doobie at age 85 in my garage. They almost got “caught” by my husband as they tried to clean up the bin of dog food that they had knocked over, giggling the entire time. We didn’t know the whole story until a few weeks later. She was very clear that “she didn’t inhale.” She also didn’t appreciate our suggestion that we buy her a bong as a stocking stuffer.

And please note that I use the term “white trash” responsibly. I’ve accepted my own  upbringing of red Solo cup versus fancy stemware, and Campbell’s Cream of Mushroom Soup as a base for almost every holiday recipe.

As a very impressionable little girl in the 70’s, I was greatly influenced by the nuns at my Catholic elementary school, but even more so by the Waltons and Ingalls (Little House on the Prairie). They were the epitome of how families should behave. I have held fast through more than one therapy session that it’s not “enabling” IF:

Even if it means forcing a group of people together that sometimes have little more in common than their DNA, a marriage license, or black and white photos of people you don’t know … dammit, we will sit down, thank the cook, have fun, and count our blessings.

Typically, besides the illegal drug use explained above, hangovers are probably the worst of the damage … no bullet holes or black eyes. And that diabetic coma … we did have to call the paramedics that year. Oh yeah, someone might cry, slam a door, ball up their fist, hide in the RV on the side of the house, or make up an excuse to go to the store just to get away, but … dammit, we will sit down, thank the cook, have fun, and count our blessings.

My gal pals, also raised by 70’s TV, start the “this year it’s going to be different” and “whose family is more dysfunctional” series of pep talks weeks before. We say it is for “mama” or “auntie” — they won’t be around forever. In our heart of hearts we want to believe that so-and-so won’t be an inconsiderate asshole again this year.

We consider for a moment, even doing research on TripAdvisor, having a Thanksgiving “just the hubby and I” on some beach where the only cranberry on the menu is in some fruity adult beverage. Then we experience massive guilt and convince ourselves that we CAN create the perfect holiday memory. We’ll imagine, like every year, a skinny blonde family, playing football in the street, joking with each other, and want that for ourselves. Even though we are round, dark, and Portuguese.

So, we’ll comfort ourselves with deviled eggs, peanut butter and celery, green bean casserole (don’t forget French’s Fried Onions and for god sakes, don’t use any low fat, healthy shit), and mashed potatoes with no less than two pounds of butter. And everyone will take an obligatory tablespoon of green jello salad and canned sweet potatoes topped with marshmallows — made specifically for the one person in the group who has been looking forward to it since last year.

And … dammit, we will sit down, thank the cook, have fun, and count our blessings.

Like Christmas Vacation with Chevy Chase, there will be out-of-town guests who will arrive in a cloud of smoke, excited to show off their newest gun, with their dog that pees on the front door. Oh, and they just went on the Paleo diet or not doing gluten, but … dammit, we will sit down, thank the cook, have fun, and count our blessings.

Somewhere between the third and fourth Bloody Mary of the morning, there will be a moment that you’ll look over at mama and she’ll be laughing so hard she’ll be sideways on the couch. Your uncle will be doing this funky thing with his dentures that makes the kids scream with delight. You’ll give a long, strong hug to your cousin who showed up alone, as things are really that bad at home. Someone else will do the dishes on the third night. You’ll beat your 7-year-old nephew at ping-pong (aha! I’ve still got it!). The brittle 8mm movies from 1972 will make us cry about those who are gone. You’ll hear your husband proudly explain the hydraulics of his ceiling-mounted slot car table that took him ten months to build … that only gets used twice a year, during the holidays.

…. and you’ll get through the four days of house guests; four days of gastro-upset from eating spinach dip and leftover stuffing for breakfast, lunch and dinner; and four days of wondering if “family is worth it.”

Because dammit … two weeks from now I won’t be on the beach. I’ll be sitting down, cooking, having fun, and counting my blessings. And I am blessed.

Very Happy Thanksgiving wherever you may be,

PS — And yeah, I know, on the flip side, my in-laws barely tolerate me and my “5K Turkey Trot” around our neighborhood. I really do make them wear an official “race bib.” And I also know, they hope that this year I’m not the uptight Martha Stewart on amphetamines who blogs about them.

4 Responses to Another white trash Thanksgiving